Bathrooms in private households are constantly changing: If you are also thinking about redesigning your bathroom, you will probably come across a Stone Resin bathtub. This special material provides many benefits, some of which may be attributed to the manufacturing process.

Free-standing bathtubs are often made of Stone Resin unifying the benefits of this material with modern bathroom designs. The high-quality Stone Resin is highly durable. Beyond that, it is easy to care.

Stone Resin bathtubs from Badeloft are made of a composite of acrylic polymer and natural minerals. This special composition allows us to create a very high-gloss finish on our shiny Stone Resin, while competitor products mostly provide a matt-finish. Our Stone Resin has very similar features to Corian® however, it can be manufactured at much lower costs which allow us to offer you premium Stone Resin bathtubs at competitive prices. 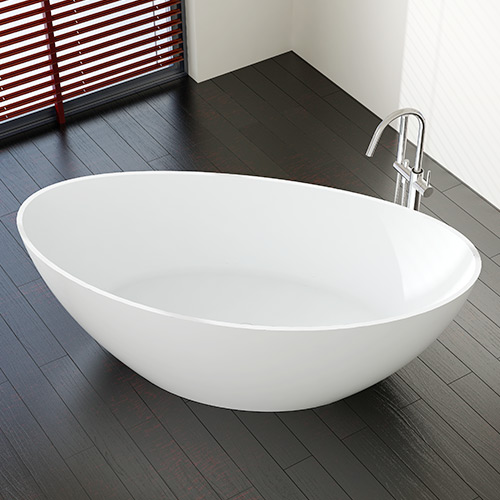 What is a Stone Resin bathtub?

The material for Stone Resin bathtubs is a composite. In order to provide the material with sufficient strength, acrylic polymer and natural minerals are combined resulting in a processable compound. Acrylic polymer usually consists of various curing agents and resin. The manufacturing of Stone Resin is divided into five steps.

Step 1:
In step 1, we are dosing the individual material components. As the Stone Resin always has to comply with the requirements of the bathtub, dosing has to be done each time. We have to calculate precisely the correct proportion of the acrylic polymers´ bonding agent. The Stone Resin may not be processed easily later on in the process if too much resin was used during manufacturing. In case of high proportions of curing agents, the material becomes brittle. At the same time, the material mix has to comply with its later use. For example, a bathtub made of Stone Resin requires different properties than Stone Resin inserts for tools.

Step 2:
This step is divided into two phases and deals with the mixing process of the individual Stone Resin components. First, the grading curve is formed. Depending on their grain size, the minerals are mixed. Then, resin and hardener are added. This creates a grading curve and a bonding agent. During the second mixing phase, the minerals are added to the bonding agent creating the Stone Resin for your bathtub.

Step 3:
During this step, your Stone Resin bathtub is already being manufactured. The liquid Stone Resin is poured into a prefabricated mold. It is important that the so-called pot time occurs directly after mixing. The Stone Resin for your bathtub can only be processed for up to six hours, otherwise, it has cured for too long and will no longer adapt to the mold.

Step 4:
During casting, air bubbles are formed. This problem may be compared with mixing cement. When adding the cement into a mold, you have to remove the air bubbles created during the pouring process before drying. In case of a Stone Resin bathtub, this is done by shaking the mold. Prior to casting, the mold is already placed on a jolting machine which now begins to move. The movement causes these small air bubbles to burst and to compress the Stone Resin resulting in a high-quality bathtub.

Step 5:
As soon as this is finished, the drying process starts. The bonding agent cures by being heated at a low temperature. The drying phase may not be shortened artificially by increasing the temperature. Later on in the cooling stage, this would cause damages due to tension within the material. Depending on your desired bathtub or cast product, the drying phase takes approximately 12 hours. Then, the Stone Resin bathtub is removed from the mold.

A Stone Resin bathtub provides you with several advantages

Particularly in sanitary facilities, i. e. for bathtubs and sinks, it is recommended to use a composite from minerals. The surface of the bathtubs and sinks is completely smooth and seamless. Bacteria, dirt or germs have no chance to settle, as there are no pores in the surface of the bathtub. You can test the finish. If germs and dirt cannot settle on Stone Resin bathtubs, water or other liquids also bead from the water-resistant surface due to this closed pores.

This feature also results in the bathtub or sink being able to withstand the heavy strain. Especially in areas in which bathtubs are often exposed to dirty water, you should go for Stone Resin.

Generally, this bathub has very good insulation properties. If you fill it with hot water, it cools down slowly because the heat is not transferred to the bathtub. So you can enjoy a long relaxing bath. At the same time, Stone Resin is skin-friendly and feels pleasant to the touch. Your skin glides over the surface without becoming irritated by joints or bumps.

The Stone Resin material may be compared with Corian®, however, the costs are much lower. In spite of their extremely similar features, the manufacturing costs of Stone Resin amount to only one-third of the branded material. What does this mean for you? When redesigning your bathroom, you can choose a high-quality Stone Resin bathtub or sink without exhausting your budget. The longevity of the bath also speaks for itself. Opposed to common bathtubs, where only the visible part is finished and fully wetted with ceramic, our bathtubs are completely manufactured of Stone Resin. Should you discover minor scratches or nicks in the bathtub over time, you can repair your bathtub yourself. Simply use sanding paper to even out scratches and obtain an absolutely smooth finish.

What are the Benefits of Stone Resin Bathtubs?

Why should you choose a Stone Resin bathtub? One reason is simply the appeal of having a magnificent island of peace in the bathroom. You can purchase your Stone Resin bathtub in various shapes and sizes as each bathtub may be molded in an individual design. If you prefer to immerse yourself in pleasantly warm water up to your shoulders, then you will choose a high-rimmed model. Lower rimmed models appear to take up less space but also provide you with the utmost comfort. Of course, we offer you the matching Stone Resin sinks for your Stone Resin bathtub. Furnish your bathroom to your taste by selecting from free-standing or wall-mounted models.

With a Stone Resin bathtub or sink you will enjoy your bathroom for many years. Request your free Stone Resin sample and bathtub templates today and be convinced of our velvety finish and high quality. 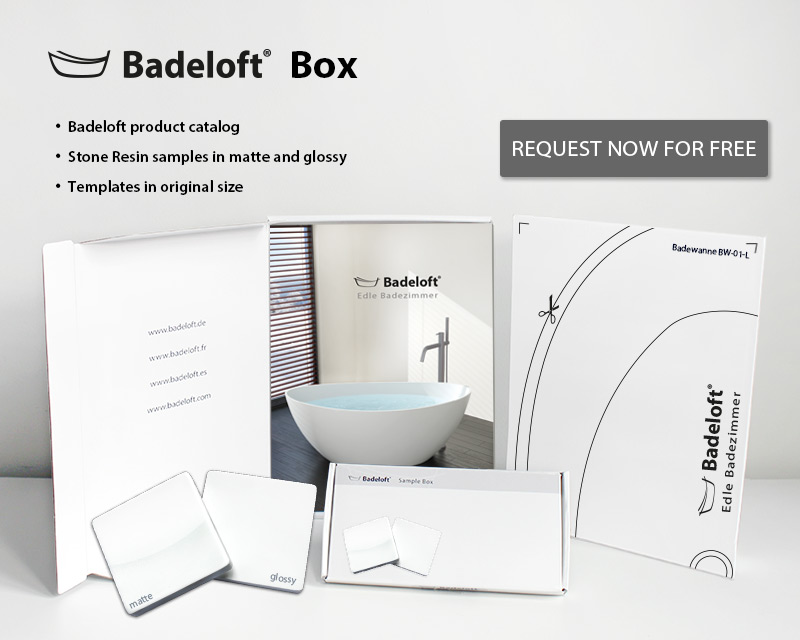